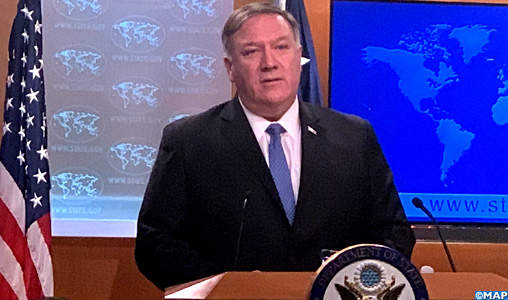 US Secretary of State Announces Visit to Morocco in Early December

US Secretary of State Michael Pompeo announced Tuesday in Washington that he will travel in early December to Morocco, “one of the strongest partners” of the United States in the region. “I look forward to reviewing our countries’ strong economic and security partnership and discussing future areas of cooperation,” Pompeo said at a press briefing.

He said his visit to Morocco will take place after NATO’s Summit of heads of state and government scheduled for 3-4 December in London, in which he will take part along with President Donald Trump. Pompeo co-chaired in October in Washington, DC., with the Moroccan Minister of Foreign Affairs, African Cooperation and Moroccan Expatriates, Nasser Bourita, the fourth session of the Strategic Dialogue between Morocco and the United States.

In a joint statement issued following this session, US Secretary of State Michael Pompeo highlighted “the leadership” of His Majesty King Mohammed VI in “promoting a bold and far-reaching reform agenda over the past two decades”. The US top diplomat also expressed his “appreciation for the precious and continuous support of His Majesty on matters of common interest such as peace in the Middle East, stability and development of Africa, as well as regional security”.

Bourita and Pompeo voiced on this occasion their attachment to the long-standing relations between the two countries which go back to the Treaty of peace and friendship of 1787.

Morocco Facing The “Hawks” Of Madrid And Algiers

Delving into Honor Killings around the Globe

Reimbursement of Hajj Fees, Retention for Next Year of…

Crisis in Libya: FM Calls for Formation of Arab Group to…

Resumption of Tourist Accommodation Activity from Next…